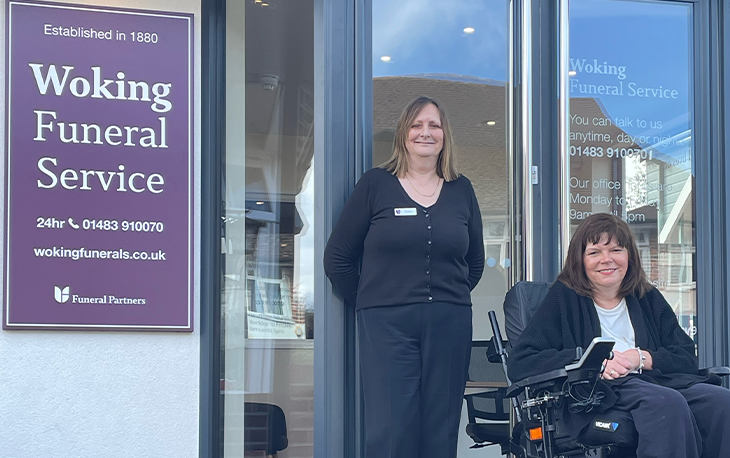 Woking Funeral Service has opened a modern new funeral home in Horsell to focus on serving the local community.

Rachel said: “Woking Funeral Service has served Horsell residents since the 1800s from their branches on Goldsworth Road and in Knaphill.

“As a florist, I’ve had the pleasure of working with them for 15 years and have often suggested that they open in Horsell. I was over the moon to be given the opportunity to help make this a reality.”

The new premises have been renovated with Rachel in mind, as she has multiple sclerosis. The branch includes touchscreen technologies, wheelchair access, automatic doors, livestreaming equipment and Bluetooth devices.

Debby explained: “By making their premises so accessible to people with disabilities, Woking Funeral Service will be welcoming to a large number of people.

“Having lived locally for the last 25 years, I look forward to meeting, and being able to help, more of this wonderful community under the Woking Funeral Service name.”

Situated on the bustling high street with on-site parking, accessible bus routes and a prominent window display, Woking Funeral Service looks forward to welcoming residents to its modern funeral home and getting involved with the thriving community.

“We’ve helped families raise over £436,301 for charities like Woking & Sam Beare Hospices through MuchLoved, the online bereavement platform, on behalf of their loved ones, and we can’t wait to do more for the Horsell community.”

Rachel concluded: “The village and local businesses have been very welcoming to us. We have only been open for a short period of time and are pleased to already be helping families.”

Get in touch about our special opening discount of £300 off Funeral Plans until 31st May 2022 by emailing woking.horsell@funeralpartners.co.uk or calling 01483 910 070. Woking Funeral Service can be contacted by phone 24 hours a day, with their Goldsworth Road funeral home being open on Saturdays between 9am and 1pm.

Have you found what you are looking for today?